China’s demonstration of its capability to destroy an aging satellite in 2007, and the collision between the American satellite Iridium and the Russian Cosmos in 2009 brought a new emphasis on the orbital debris problem. Although most of the work had been concentrated on avoidance prediction and debris monitoring, all major space agencies are now claiming the need for active removal of debris [R1, R2]. In 2011, about 14’000 debris above 10 cm were catalogued (see Figure 1). About 2’000 of these are remains of launch vehicles and 10’000 originate from non-operational satellites. In addition, over the years, many studies have been performed to actively remove debris from LEO and GEO, and there is a vast pool of information on this topic. The debris of interest in LEO are of two types: spent rocket upper stages and dead satellites. The masses of the earlier go from 1.4 to 8.9 tons with dimensions from 2 to 4 meters in diameter and from 6 to 12 meters in length. The satellites masses are in the same range but their dimensions and shapes can change a lot from one object to another. According to the Inter-Agency Space Debris Coordination Committee (IADC), the debris to remove in priority are the ones with the highest masses and greatest probability of collision [R3]. These high-priority objects can be found in well-defined altitude and inclination regions. The most numerous family is the one composed by SL-8 rocket bodies (more than 150 individuals) but the heaviest objects are for instance the SL-16 rocket bodies and Envisat.

In Europe, several missions have made demonstrations of rendezvous technologies, which can be reused for Active Debris Removal (ADR). The ESA Automated Transfer vehicle (ATV) performs cooperative rendezvous with International Space Station (ISS). GRACE (Gravity Recovery and Climate Experiment, NASA JPL), launched in 2002, are twin satellites in formation flying. TerraSAR-X (DLR and EADS Astrium, launched in 2007) was joined by TanDEM-X in 2010. Both satellites perform formation flying at distances as short as 250 m. Prisma (SSC) has demonstrated inspection and rendezvous with a cooperative object. DLR’ DEOS should demonstrate the robotic arm for servicing missions. Proba-3 (ESA, to be launched in 2015-2016) will consist in two satellites of 350 and 200 kg that can autonomously perform formation flying to distance from 250 down to 25 m. All these missions are stepping stones toward ADR. However, key elements remain to be validated for rendezvous with a non-cooperative object. These elements will require further technology development and demonstration, especially to minimize mission risks. 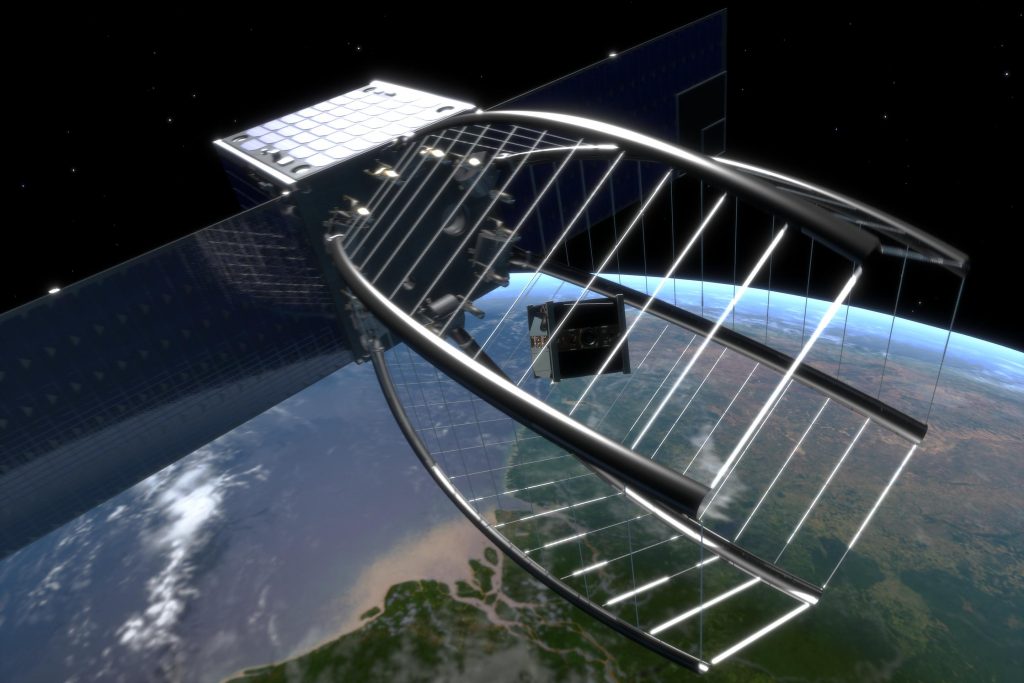 Although the “greatest-threat” debris are large rockets bodies (R/B) and large satellites, some of the technologies needed for ADR can be scaled down and demonstrated with a nano/micro-satellite (20-100 kg). This observation has been one of the founding rationale for the CleanSpace One project.

Objectives of the project

The motivation behind the CleanSpace One (CSO) project is to advance TRL levels and start mitigating the impact on the space environment by acting responsibly and removing our “debris” from orbit. As a non-commercial entity, EPFL holds a unique position ensuring that ecological goals and disruptive research are not affected by the need to generate profit.

The objectives of the CleanSpace One (CSO) project are to:

The project was officially initiated in 2012 while under the responsibility of the Swiss Space Center and was transferred to the EPFL Space Engineering Center (eSpace) at the end of 2014.

29.11.19 - Startupticker.ch During the ESA Ministerial summit in Seville, ministers in charge of space affairs from the 22 ESA Member States agreed on a budget of 14.4 billion euros to fund space-related projects.

For the pillar "Space safety and security", Switzerland takes the lead in the removal of space debris thanks to ClearSpace, a spin-off from the EPFL Space Center (eSpace) focusing on developing technologies and services to remove unresponsive (failed) satellites from space. The startup has received funding for its ClearSpace-1 ADR mission under the ESA ADRIOS programme. ESA has also selected ClearSpace to be the leader of the industrial consortium for the project.

A giant Pac-Man to gobble up space debris

06.07.15 - The Clean Space One Project has passed a milestone. The space cleanup satellite will deploy a conical net to capture the small SwissCube satellite before destroying it in the atmosphere. It’s one of the solutions being tested for eliminating dangerous debris orbiting the Earth.