The main objective of the Trace Gas Orbiter, as announced by ESA, is to search for any “activity” upon the surface of Mars through the study of its trace gases. By “activity” is understood any biological process or inner thermal/chemical planetary process having an effect upon the atmosphere. The purpose of this presentation will be to draw a general outline of the accumulated knowledge within which this mission is being conducted and to show that indeed it is possible that Life existed once on Mars. Alternatively, considering the environmental conditions prevailing along the last 3.5 billion years, the process of evolution might not have had time to succeed in reaching that level of complexity.

What is the CASSIS camera ? 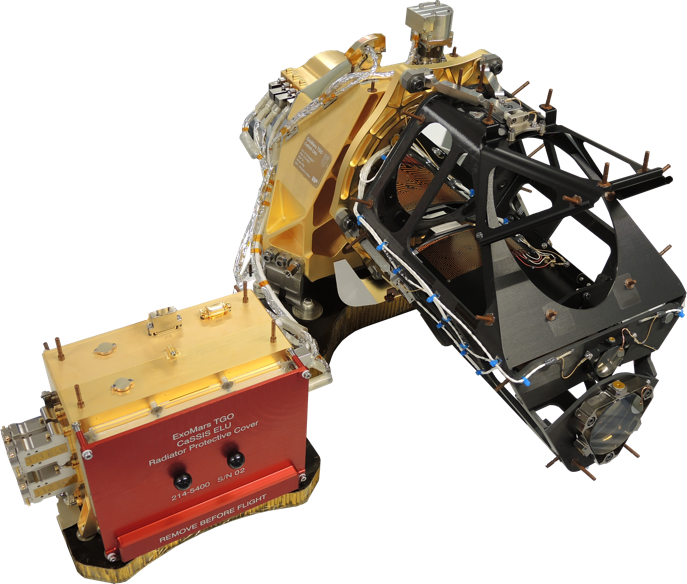 CASSIS (Colour and Stereo Surface Imaging System) is a high resolution imaging system developped by the Swiss team. The camera will work together with the other instruments on the probe, including the NOMAD spectrometer and the FREND neutron detector, in the effort to identify geological sites on Mars.

CASSIS (Colour and Stereo Surface Imaging System) will play a key role in observing locations of possible atmopsheric emissions, as well as analysis of landing sites for future missions. It will work together with the other instruments on the probe, including the NOMAD spectrometer and the FREND neutron detector, in the effort to characterize geological sites.

Sites whose features – crevasses or traces of erosion, runoff or volcanism – indicate potential sources of gas will then be analyzed in greater detail by CASSIS. The camera will take color photos using stereoscopic imaging, a process of taking photos from two different angles.

The resulting images are extremely precise. The TGO will be in a non-sun-synchronous orbit – it won’t fly over the same spot at the same time – which means that the probe will allow researchers to observe the surface of the planet at different times of day. They will be able to see various processes at work, like condensation and ice sublimation at the poles and the formation of dust devils. The data will also be used to identify landing sites for future probes.

Researchers at EPFL’s eSpace worked mainly on the calculations for calibrating the camera as well as on algorithms for processing information provided by the stereoscopic images. The CASSIS camera is designed to enable easy generation of digital elevation models – 3D representations of the surface. The Mars Exploration group at eSpace has developed a program to precisely identify the position of photographed sites and create Digital Elevation Models (DEM) from stereo pairs. These data will supplement data obtained during previous missions, such as Mars Global Surveyor, Mars Express and Mars Reconnaissance Orbiter.

This website uses cookies to improve your experience while you navigate through the website. Out of these cookies, the cookies that are categorized as necessary are stored on your browser as they are essential for the working of basic functionalities of the website. We also use third-party cookies that help us analyze and understand how you use this website. These cookies will be stored in your browser only with your consent. You also have the option to opt-out of these cookies. But opting out of some of these cookies may have an effect on your browsing experience.
Necessary Always Enabled
Necessary cookies are absolutely essential for the website to function properly. This category only includes cookies that ensures basic functionalities and security features of the website. These cookies do not store any personal information.
Non-necessary
Any cookies that may not be particularly necessary for the website to function and is used specifically to collect user personal data via analytics, ads, other embedded contents are termed as non-necessary cookies. It is mandatory to procure user consent prior to running these cookies on your website.
SAVE & ACCEPT