09.07.20 – ESA’s Euclid mission has reached another milestone on its journey towards launch. Its two instruments are now built and fully tested. These have been delivered to Airbus Defence and Space in Toulouse, France, where they are now being integrated with the telescope to form the mission’s payload module.

Euclid consists of a 1.2-metre mirror telescope that is designed to work at both visible and near-infrared wavelengths – the latter being just longer than the red light humans can see. The telescope will collect light from distant cosmic objects and feed it into two instruments.

The Visible instrument (VIS) and the Near Infrared Spectrometer and Photometer (NISP) will run in parallel, recording data simultaneously from whatever portion of the sky the telescope is pointed at. 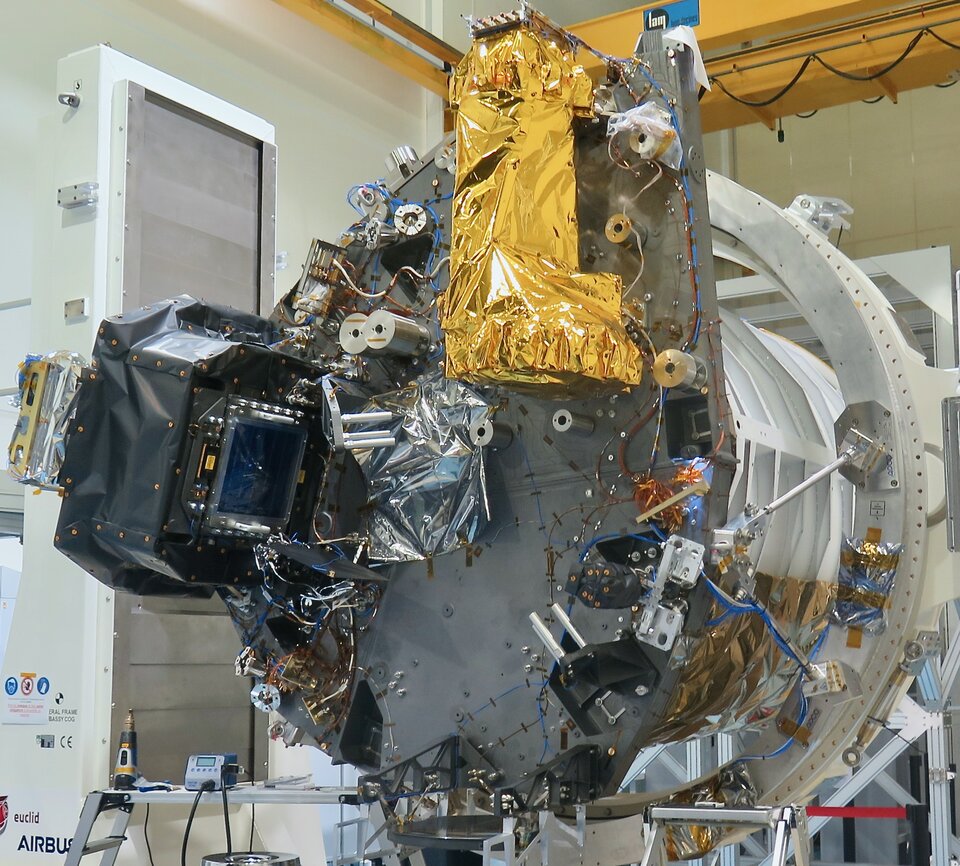 Euclid’s mission is to measure the shapes of more than a billion galaxies, and the accurate redshifts of tens of millions of galaxies across more than one third of the sky. The redshift is an effect caused by the expansion of the Universe. It stretches the wavelength of light emitted by distant galaxies; the further away the galaxy, the more extreme its redshift. The galaxies in Euclid’s survey will span 10 billion years of cosmic history, and allow scientists to investigate the mysterious dark matter and dark energy that are thought to dominate the Universe.
The VIS instrument will handle the precise measurement of galaxy shapes by taking the very best images of distant galaxies that it possibly can. To do this, the instrument uses a mosaic of 36 CCDs, each of which contains 4000 pixels by 4000 pixels. This gives the detector a total of about 600 megapixels.

“The design, development, manufacturing, testing and calibration of the VIS instrument over a dozen years to a stringent specification has been a challenge,” says Mark Cropper, VIS instrument Lead and Professor at the UCL Mullard Space Science Laboratory, UK.

“We are immensely proud of what the VIS Team has achieved to bring this project to its culmination. That the final performance exceeds our expectations is a tribute to their expertise, dedication and professionalism.” 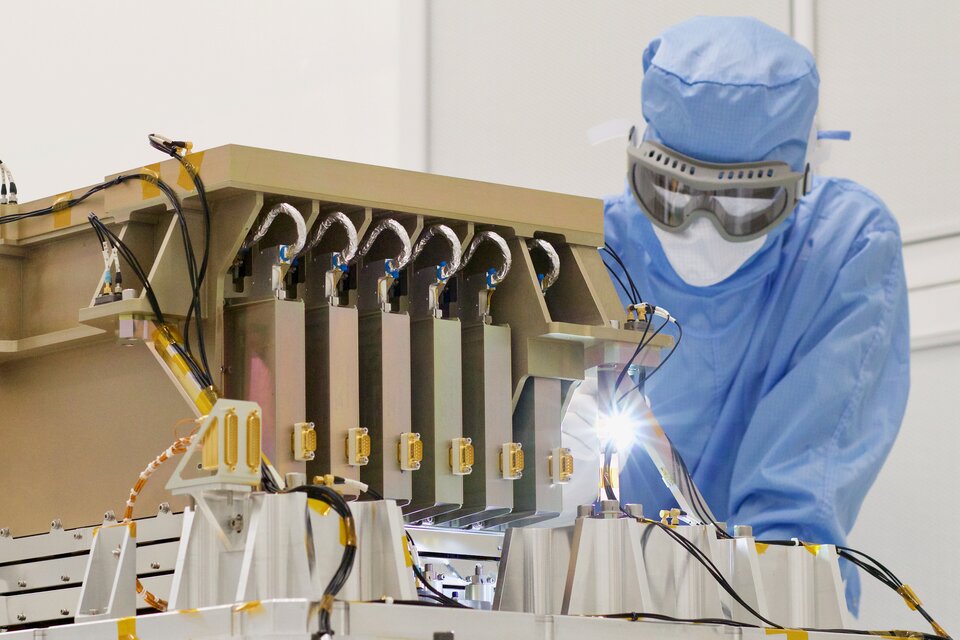 Not only is the number of pixels impressive, the instrument will also deliver the best low-light sensitivity over a broad range of wavelengths at long integration times.
“These are very special CCDs, they’ve been developed specifically for Euclid over many years,” says Alex Short, ESA’s VIS payload engineer.

The other instrument, NISP, is dedicated to making spectroscopic measurements of galaxies, which involves splitting their light into individual wavelengths. This allows the redshifts to be deduced. This property allows cosmologists to estimate the distance to the galaxy in question, and will allow Euclid’s data to be turned into the largest, most accurate 3D survey of the Universe ever conducted.

“This is, however, not the end of the story for us as many major activities have to be completed with NISP at satellite level. We are waiting impatiently for the first light in flight demonstrating the excellent global performances.”

The NISP detector will feature the largest field of view ever flown in space for an infrared instrument. 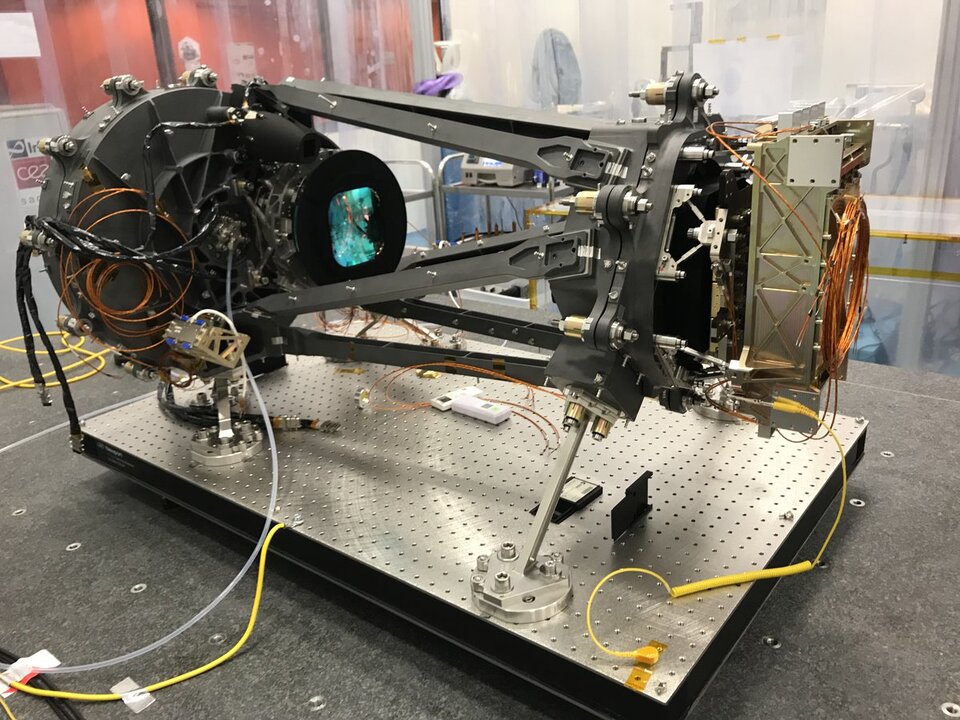 “The quality of the optics is just amazing,” says Tobias Boenke, Mission System & NISP Instrument Engineer at ESA.
A key factor in achieving Euclid’s exceptional optical accuracy was a decision made early in the project’s history to construct the entire payload module out of silicon carbide. The use of this material at ESA was pioneered in the manufacture of the telescope for the Herschel space mission. On ESA’s Gaia mission, the support structure for the spacecraft’s subsystems were mounted on a silicon carbide frame. On Euclid, the material has been used for the instruments as well as the telescope.

Whereas metal expands and contracts as its temperature changes, thus degrading an optical system’s ability to focus light, silicon carbide is extremely stable to such variations in temperature. But using the compound brings its own challenges. Silicon carbide is a ceramic and so much more brittle than metal.

“It was a big challenge to be able to manufacture the instruments from this material and make sure they can remain undamaged during the launch,” adds Tobias. 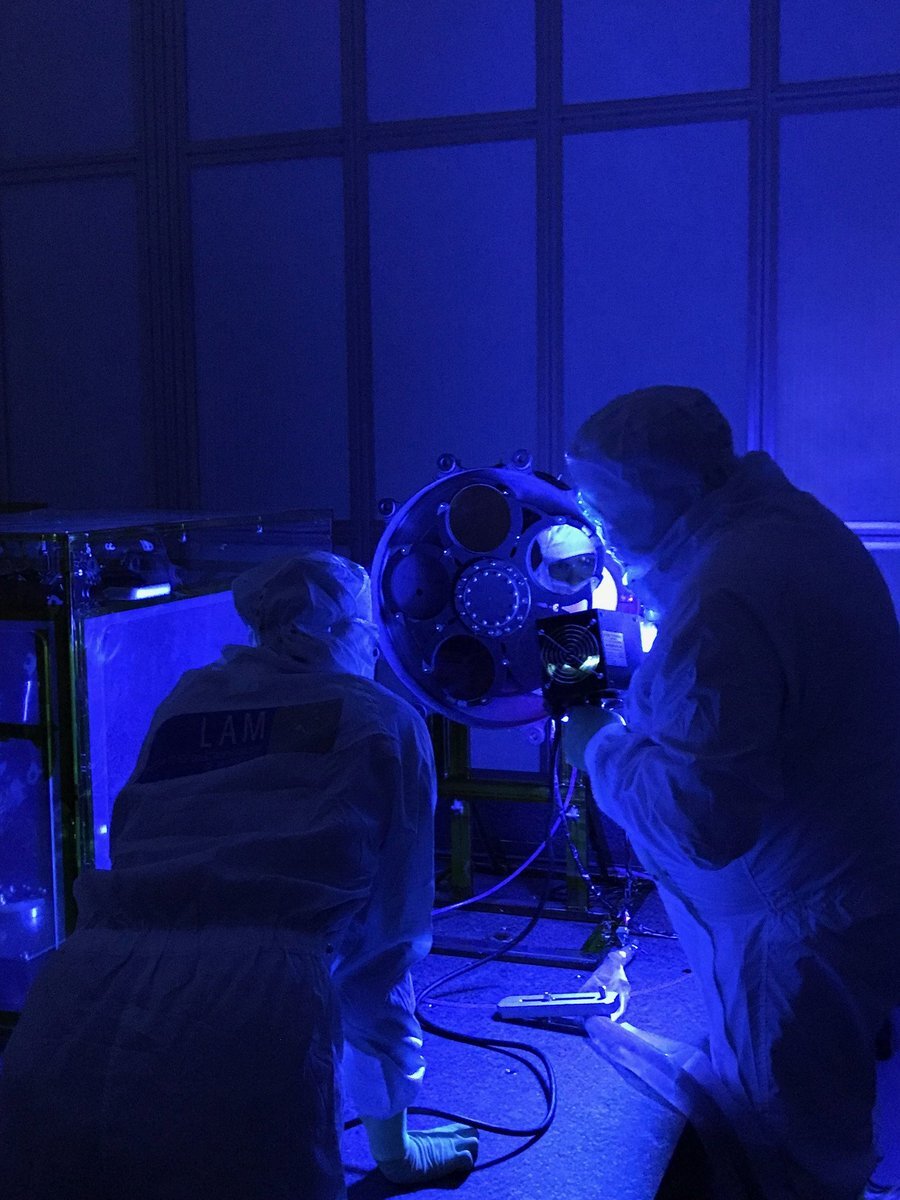 Like VIS, NISP also uses specially designed state-of-the-art detectors to record the faint light coming from distant stars and galaxies. Unlike VIS, NISP can also operate in spectrographic mode. The detectors, which are operated at –180°C to provide ultra-low noise and high sensitivity, register these ‘spectra’ and convert them into tiny electronic signals. These signals can then be amplified and accurately measured to provide the photometric and spectroscopic redshifts.
The instruments will receive light from Euclid’s telescope, which has already been assembled at Airbus, Toulouse. Like the instruments, it too is made from silicon carbide and is a state-of-the art construction in all senses.

A special component behind the telescope, called the dichroic, separates the collected light and diverts the visible wavelengths to VIS and the infrared wavelengths to NISP.

When the information from VIS and NISP is combined, scientists will be able to deduce the way that the Universe’s large-scale distribution of galactic structures has built up throughout cosmic history. This will help them determine the speed at which such structures grow, providing strong constraints on the nature and amount of dark matter and dark energy in the Universe.

The instruments were prepared for delivery to Airbus just before the COVID-19 pandemic imposed restrictions and lockdowns in many ESA member states. Fortunately, VIS was already at Airbus, and NISP had to wait for a few weeks for shipment from Marseille to Toulouse, but was not on the critical path. 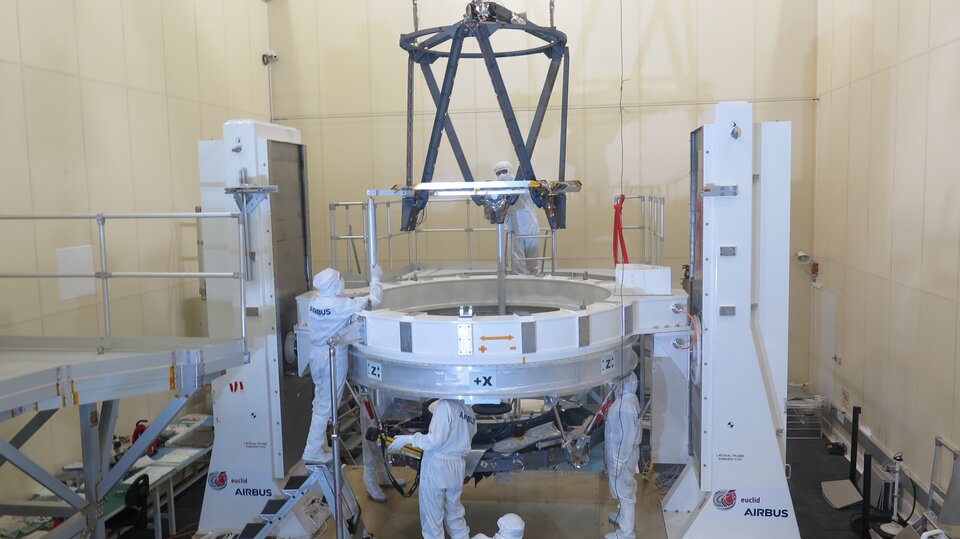 Integration of the Euclid telescope “I am extremely grateful to all project parties: institutes, industry and colleagues at ESA for their dedication and commitment during these difficult times,” says Giuseppe Racca, ESA’s Euclid project manager.
“We were hit by the pandemic in a particularly critical moment when both VIS and NISP were to be transferred to industry. Despite the work and travel restrictions a concerted effort by all parties allowed to minimise the delays by implementing distributed and sequential integration activities of the instrument units and remote monitoring.”

Now that the instruments have been delivered to Airbus, they will be integrated first with the telescope, and next with the rest of the payload module. It has been a long journey getting this far. Euclid was selected for implementation in 2011, having already undergone almost five years of studies. While there is still a lot of hard work and testing ahead, the delivery of the instruments and telescope means that the spacecraft can really begin to come together.

“Finally, we have something in front of our eyes,” says Luis Miguel. “It’s not just paper anymore. It’s a fantastic piece of hardware; beautiful in a way.”

Integrating the payload module will last several months as it is painstaking work to get everything bolted together, precisely aligned and electronically talking. The instrument’s control units have already been mechanically and electrically integrated to the payload module. These tests have verified that the instruments can be properly powered by the spacecraft, can talk to the onboard computers, and can transmit the science data that will then be downloaded to ground through the spacecraft antennas.

Once the telescope has been integrated with the rest of the payload module, it will be shipped to Centre Spatial de Liège, Belgium, for ‘end-to-end’ testing in a thermal vacuum chamber that can simulate the conditions of space as well as possible on Earth. This test is scheduled to take place in February and March 2021. 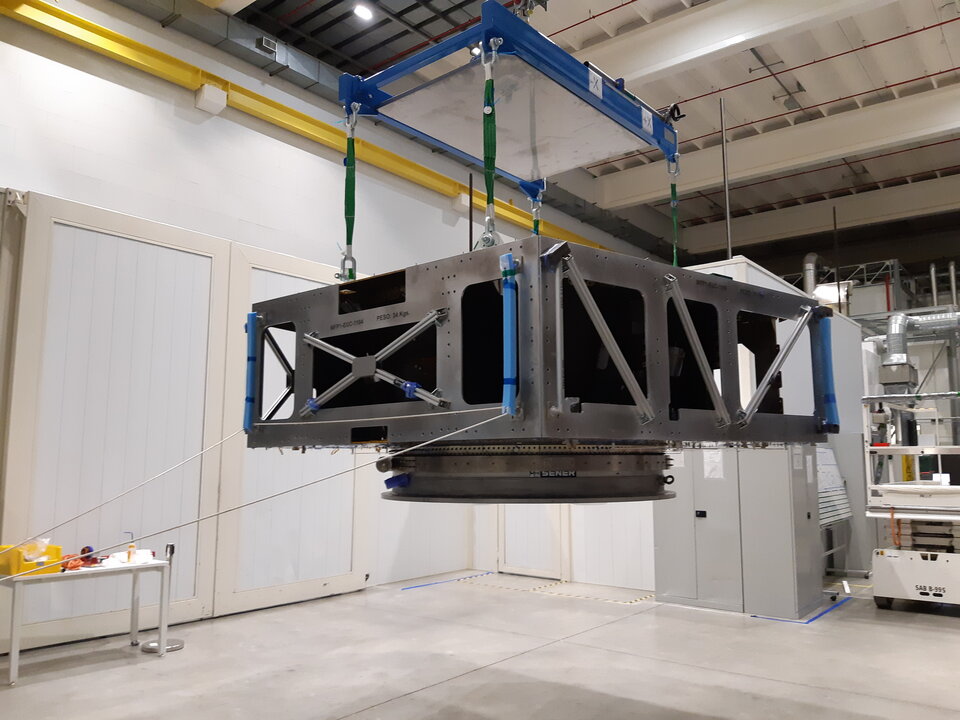 Once that test shows that everything is working as expected, the payload module will be shipped to the prime contractor Thales Alenia Space (TAS), in Torino, Italy. TAS has been building the service module, which contains essential systems such as power, propulsion and communications.
The service module’s main structure recently passed its structural and thermal tests and is now ready to have the various systems integrated inside. TAS will begin by laying down the pipelines for the propulsion systems, and the cabling for other distributed systems. Flight electronics, including computers, power units, and attitude control units, are already mounted on their own structural panels and these will now be installed inside the main structure. Integration is due to be complete in the third quarter of the year, at which time tests will be performed.

TAS will then integrate the payload module with the service module to form the final, finished spacecraft. Then, another round of tests will ensure that everything is working together properly. At that point, the spacecraft is essentially finished, and ready for launch.

Launch is currently scheduled for the second half of 2022 from Europe’s spaceport, Kourou, French Guiana.

Euclid is an ESA medium class astronomy and astrophysics space mission. By making use of both weak gravitational lensing, which measures the distortion of distant galaxies caused by intervening matter, and baryonic acoustic oscillations, based on measurements of the clustering of galaxies, the mission will capture a 3D picture of the evolving distribution of both dark and ordinary (or baryonic) matter in the cosmos. This will enable scientists to reconstruct the past few billion years of the Universe’s expansion history, estimating the acceleration caused by the mysterious dark energy to percent-level accuracy, and possible variations in the acceleration to 10 percent accuracy.

ESA selected Thales Alenia Space as prime contractor for the construction of the satellite and its Service Module, with Airbus Defence and Space chosen to develop the Payload Module, including the telescope. Euclid comprises two instruments: the visible imager (VIS), and the near-infrared spectro-photometer (NISP). The Euclid Consortium is a collaboration of nationally funded institutes responsible for the definition of the scientific mission and the provision of the scientific instruments and data processing. The VIS instrument is being built by a consortium of nationally funded institutes led by Mullard Space Science Laboratory (MSSL), University College London, UK. The NISP instrument is being built by by a consortium of nationally funded institutes led by the Laboratoire d’Astrophysique de Marseille (LAM) in France; its detectors are provided by NASA.

Shoot(s) for the Moon!

Any cookies that may not be particularly necessary for the website to function and is used specifically to collect user personal data via analytics, ads, other embedded contents are termed as non-necessary cookies. It is mandatory to procure user consent prior to running these cookies on your website.